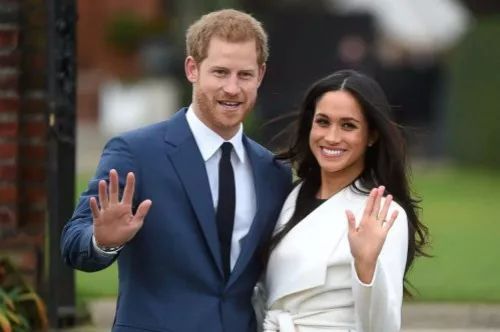 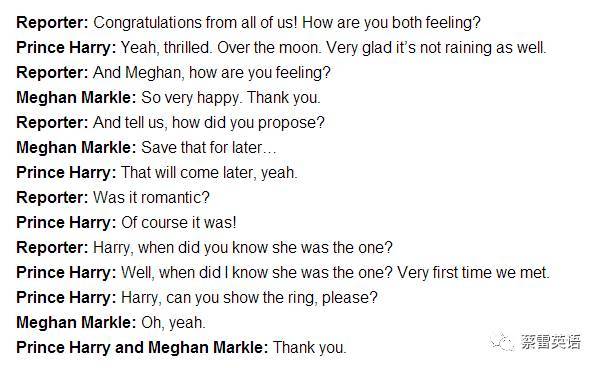 Mishal Husain: Your Royal Highness, Meghan Markle, congratulations to you both.

Prince Harry: It happened a few weeks ago, earlier this month, here at our cottage; just a standard typical night for us.

Meghan Markle: Just a cozy night, it was – what we were doing – just roasting chicken and having ...

Prince Harry: Roasting a chicken, trying to roast a chicken.

Meghan Markle:Trying to roast a chicken and it just – just an amazing surprise, it was so sweet and natural and very romantic. He got on one knee.

Mishal Husain:Was it an instant “yes” from you?

Meghan Markle:Yes, as a matter of fact, I could barely let you finish proposing. I said, “Can I say ‘yes’ now?”

Prince Harry: She didn’t even let me finish. She said, “Can I say yes? Can I say yes now?” And then there were hugs and I had the ring in my finger and I was like, “Can I – can I give you the ring?” She goes, “Oh, yes, the ring.” So now, it was – it was a really nice moment, it was just the two of us, and I think I managed to catch – catch her by surprise as well.

Mishal Husain:And this is how long after you first met?

Meghan Markle: Oh, it would be a year and a half, two, a little bit more than that?

Prince Harry: No, just about – it would be about a year and a half, yeah.

Mishal Husain: Which for most people would be quite a whirlwind. Is that how it’s felt to you?

Meghan Markle: I don’t think that I would call it a whirlwind in terms of our relationship. Obviously, there have been layers attached to how public it has become after we had a good five, six months almost with just privacy, which was amazing. But now, I think we were able to really have so much time just to connect and we never went longer than two weeks without seeing each other, even though we were obviously doing a long-distance relationship. So it’s – we made it work.

Mishal Husain:How did you first meet?

Prince Harry:Ah, yes, we first met – we were introduced actually by a mutual friend, who – we will...